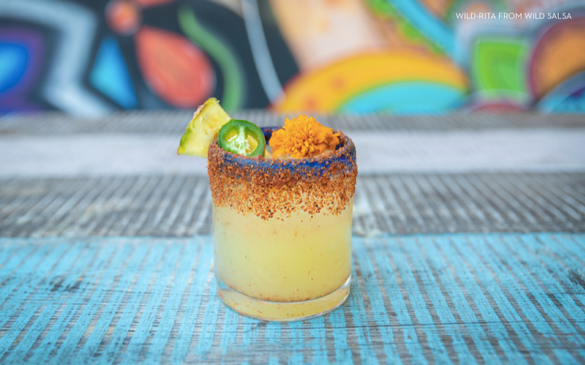 Dallas' history with America's most famous frozen concoction is as storied as it is salty. In 1971, a clever restaurateur, Mariano Martinez, invented the frozen margarita machine – and since then the way Dallas drinks has never been the same. That first machine now sits in the Smithsonian National Museum of American History.

This summer, Dallas celebrates one year of becoming the Official Home of the Frozen Margarita and the launch of the Margarita Mile, a collection of the city's best and most brazen margaritas, conveniently collected in a colorful app. Think of it as the ultimate margarita bucket list. VisitDallas will continue to showcase Dallas' unique place in history of American mixology with the help of Julian Rodarte – official Margarita Mile Ambassador and owner of Beto & Son.

There are now almost 20 stops (and counting!) on the Margarita Mile to leave visitors satisfied. You'll want to check out the newest stop on the Mile – the Dallas Cowboys-inspired Cowboyrita at AT&T Stadium.

The free Margarita Mile app is available on the Apple Store and Google Play.

Since 2008, AT&T has called Dallas home. In 2018 the company broke ground on the $100 million AT&T Discovery District, a brand-new shopping, dining and entertainment hub in the heart of Downtown Dallas for workers and travelers. The district will feature a wide array of shops, outdoor event space, restaurants, a beer garden and more than 300 scheduled events and activities throughout the year.

Since its completion in 2012, Klyde Warren Park has drawn millions of visitors to the Dallas Arts District and the surrounding areas. Last year, the park announced a $76 million expansion to create more space for activities and walkability. Part of the park's expansion will also include a new state-of-the-art VisitDallas Experience Center, an innovative space that will tell Dallas' story through interactive technology and experiences for visitors.

In 2019, Virgin Hotels will open a 200-room hotel in Dallas' hip and growing Design District. The $80 million lifestyle hotel will cater to the new, savvy traveler, offering free Wi-Fi, cancellation and late checkout and a complimentary social hour for guests. It's the fourth planned Virgin Hotel property in the U.S.

Formerly the First National Bank Tower, The Thompson is set to open later this year as part of The Drever, the mixed-use space transforming the historic building in Downtown Dallas. The $380 million redevelopments will transform the 52-story, 1.5 million-square-foot skyscraper that was originally designed for legendary Texas oilman H.L. Hunt and also served as the fictional façade for Ewing Oil, J.R. Ewing's office in the hit television series Dallas. Once finalized, The Thompson will include 218 rooms, an amenity deck with a resort-style pool, a luxurious spa, fitness centers, office, restaurants, and retail space. Building redevelopment also includes 324 apartment units.

The Epic is set to open in Deep Ellum in 2019. The project will be the first of its kind in the neighborhood. It will consist of eight acres of mixed development, including office space, multifamily and hotel space with ground floor retail space. The Epic's design will reflect
a mix of the historic past of Deep Ellum, as well as give a glimpse into the neighborhood's thriving future. The hotel portion of The Epic will be the Pittman Hotel, a 164-room Kimpton property in the historic Dallas landmark, Knights of Pythias Temple, named after William Sidney Pittman, the architect behind the original building and son-in-law of Booker T. Washington. Originally, built in 1916 Knights of Pythias Temple was the first commercial building in the city built by and for African-American professionals.

After more than ten years, Air France returns to Dallas-Fort Worth International Airport (DFW) this spring. The airline will fly direct from Dallas-Fort Worth to Paris' Charles de Gaulle Airport, begin- ning on March 31 through the 2019 summer season. Service will be three daily flights from March 31 – June 30 and September 4 – Oc- tober 25 and increasing to five daily flights in July and August. The airline will be the 16th international airline to fly from DFW.

The Crow Museum of Asian Art recently celebrated its 20th anniversary with a multi-million-dollar expansion, a new name and the announcement of five new exhibitions including Jacob Hashimoto: Clouds and Chaos and Our Asian Art Museum: The Crow at Twenty. The re-imagined museum dramatically expands its footprint along Harwood and Flora Streets. In addition to the renovation, the museum opened the doors to Pearl Art Studio, a creative workplace across from the Crow Museum of Asian Art. The studio will serve as a place for families, corporate teams, artists and individuals to experience and experiment through workshops and art-making opportunities.


for his acclaimed work as principal conductor of the Metropolitan Opera and guest engagements with leading U.S. orchestras.

DIOR: FROM PARIS TO THE WORLD |

After debuting at the Denver Art Museum last year, Dior: From Paris to the World makes it second and only other U.S. stop at the Dallas Museum of Art. The stunning exhibit includes a selection of more than 100 haute couture dresses, original sketches, photographs and other archival material that highlight the more than 70 years of legacy and global influence of the House of Dior. The exhibition not only profiles Christian Dior, but also his subsequent directors including Yves Saint Laurent and John Galliano among others.

Recently, the Dallas Holocaust and Human Rights Museum began construction in Dallas' historic West End. The new building will expand the educational and cultural programming in the southwest U.S. to advance human rights and combat prejudice, hatred and indifference. The design of the new facility will create a narrative showing the journey of the many who experienced the Holocaust and other social injustices.

Dallas' Downtown is in the middle of a resurgence thanks to a boom in hotel and retail development. Once a business hotspot by day but ghost town by night, Downtown is now a vibrant place where visitors can do it all – dining, culture, art, shopping and entertainment.

Don't miss: Always known for luxury shopping, Downtown boasts the flagship Neiman Marcus and boutique shop, Forty-Five Ten. Walk to the West End for a dose of history at the Sixth Floor Museum, chronicling the life and legacy of JFK, then head to the Arts District nearby for a wealth of artistic experiences.

Don't miss: The Happiest Hour, Uchiba and anything on McKinney Avenue. Hop on and off the historic McKinney Avenue Trolley for a free and fun ride. This neighborhood is also home to the American Airlines Center, which hosts the Dallas Mavericks, Dallas Stars and top music artists.

Dallas' Design District is about to boom. This community, just northwest of Downtown, has been a warehouse district for craftspeople to sell and produce local goods for more than 60 years. By day, there are more than 400 international showrooms filled with furnishing, textiles, art and antiques. By night, the district is an up-and-coming nightlife destination.

Don't miss: The Dallas Contemporary sits on the edge of the Design District and offers some of the city's most Avant Garde art exhibitions. Search for unique finds at White Elephant and Lula B's and check out the outrageous burgers at Rodeo Goat.

Located west of Downtown across the striking Margaret Hunt Hill Bridge, Trinity Groves is a booming dining destination. Central to the area's success is the Restaurant Concept Incubator program, which gives local chefs the opportunity to bring their restaurant dreams to reality.

This past fall Mavs Gaming opened its high-tech Gaming Pavilion in Deep Ellum, following the inaugural season of the NBA 2K League, the professional esports league co-founded by the NBA. The pavilion features a 4,800 square foot gaming arena, including a 36-foot stage with five-versus-five gaming desks and a 35-foot gaming screen. Additionally, there are lounge areas, conference rooms, basketball hoops, a bar and everything else a gamer could need or want. The innovative facility hosts the Mavs Gaming team and is open to the general public for private parties, live tournaments and more.

As part of a $39 million addition to Frisco's Toyota Stadium, home to professional soccer club FC Dallas, the arena opened the National Soccer Hall of Fame in October 2018. The hall houses the museum's collection as well as trophies from the Women's World Cup, Gold Cup and other U.S. memorabilia and Olympic medals.

DALLAS TIES: FC Dallas CEO Dan Hunt made it a personal mission to bring the Hall of Fame to Dallas in honor of his father Lamar Hunt. The elder Hunt championed the sport and brought Dallas its first soccer team, the Dallas Tornado, in the late 1960s.

Last fall, the Dallas Cowboys, Federacion Mexicana de Futbol, MLS' FC Dallas and the Dallas Sports Commission announced a four-year partnership that will bring the Mexican National Team to AT&T Stadium through 2022. North Texas has become a second home for the Mexican National Team since AT&T Stadium's opening in 2009, playing a total of seven games at the home of the Dallas Cowboys. The first game is set for June 9, 2019, a few days before the 2019 Concacaf Gold Cup.

Ring in 2020 in Dallas with the National Hockey League's Dallas Stars and Nashville Predators. This January, the National Hockey League, and the Dallas Stars announced the club will host the 2020 Bridgestone NHL Winter Classic at Cotton Bowl Stadium on January 1, 2020, marking the first NHL regular-season outdoor game for the Stars. The game marks the 12-year anniversary of the annual tradition the League established of hosting a regular-season outdoor game at the start of the new year. The Cotton Bowl is only the sixth football stadium to host the Winter Classic, and it's the first time it's ever been played in a Southern city.

MLB team, the Texas Rangers, is getting a new $1.1 billion ballpark in Arlington, Texas. The stadium's biggest and most anticipated attraction will be its retractable roof and state-of-the-art air conditioning technology. The project will also include a new 400 car parking garage, 42,000 seats and a total of 24 pedestrian bridges. Other features include club spaces, children's play areas, team stores and a team Hall of Fame. Sports fans awaiting the opening of the new stadium can now enjoy the recently opened Texas Live!, an entertainment and restaurant complex adjacent from the soon-to-come Globe Life Field, where fans can watch their favorite teams on the large screens, catch a show or dine at one of the many restaurants.
Posted by rodeime at Thursday, June 06, 2019