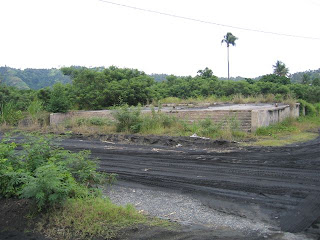 PAPUA New Guinea is enjoying new prominence amongst more adventurous
holidaymakers, with Kokopo on New Britain finding itself in the
limelight with those wanting to see the shattered remains of the-once
thriving town of Rabaul that was decimated by a massive volcanic
eruption in 1994. With most of Rabaul buried under ash, Kokopo 32km
away became New Britain's new administrative and commercial centre,
and today offers exceptional fishing, diving, Pacific War sites,
history (the remains of 'Queen Emma's' 1880s Gunantambu Mansion is
nearby,) picturesque villages, rainforests, produce markets and of
course tours of what's left of Rabaul. Kokopo Beach Bungalows has 28
bungalows, a licenced restaurant and bar, massage studio and tour
desk; price starts from 363-kina (about AU$160) a night. Details ++
(675) 982 8870 or www.kbb.com.pg

THOSE thinking of a sea-change can take inspiration at the place that
gave new meaning to the word for Australians: Barwon Heads at the
mouth of the Barwon River 18km south-east of Geelong, where the local
bridge, shores of the estuary, fishermen's jetty and the Beach House
became features of the popular ABC-TV program. Quickbeds.com has
self-contained suites at the Hawthorn Suites at 13th Beach Golf Links,
with Spring pricing about to be announced. Phone 1800 002 333 or log
onto www.quickbeds.com for details.

WAGNER and Mark Twain didn't bother autographing the menus at Vienna's
Griechenbeisl Inn in appreciation of the fine dining they'd enjoyed
there, each autographed the walls instead. The Inn is included on a
10-day Albatross Travel Group Austrian White Christmas tour from
Vienna to Salzkammergut Lake District (backdrop to the movie Sound of
Music,) Salzburgerland, Innsbruck and Luzern on December 19. Price
starts from $4489pp twin-share including touring, tips, all
breakfasts, eight dinners and Christmas lunch; air is extra. Details
1300 135 015 or www.albatrosstravel.com

A BEIJING Olympics package for swim fans includes 4-nights twin-share
at the Novotel Peace Hotel, poolside entry to 20-plus swimming events
including the Women's 200m Freestyle Semis, Men's 200m Freestyle
Final, and heats for the Men's 100m Freestyle and Women's 4 X 200m
Freestyle Relay. There's also sightseeing, most meals and beverages,
airport transfers, bilingual hosts, transfers to and from events, and
a pass to the CoSport Hospitality Centre with its internet café,
lounges, TV live feeds, and food and beverages. Price starts from
$5967pp plus air. Phone Flight Centre 131 600.

TRUE: THREE Norwegian tourists proved not to be exactly Rhodes
Scholars when they decided to book a holiday on the internet to the
sunny beaches of Rhodes in the Greek Islands. They mistyped their
airline booking form and found themselves in Rodez, a medieval town in
inland south-western France that has a 13th century cathedral, a
market place, a factory that makes plastic spoons and kitchen gloves,
and not a beach in sight. 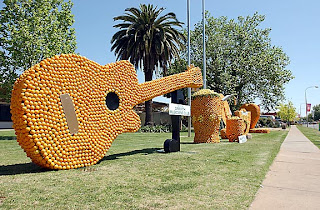 GARDEN FESTIVAL HAS PLENTY OF ZEST

GUITARS made out of oranges and chickens made with lemons are amongst
the many colourful 'street sculptures' that will be a highlight of
this year's Festival of Gardens at Griffith in the NSW Riverina. The
out-size sculptures are made by attaching thousands of pieces of
citrus fruit to 3-dimensional wire frames, and supplement the numerous
private and community gardens that are thrown open to garden lovers
during the Festival that will run from October 12 to 15; there'll also
be a Festival Dinner Dance, art displays and sales, and floral art and
quilt exhibitions. Entry to gardens is $4 per garden or $30 for an
all-gardens pass; details from 1800 681141 or www.griffith.nsw.gov.au

A FOUR-day stay in Ypres, where the Last Post is sounded beneath the
Menin Gate every evening in remembrance of the tens of thousands of
ANZAC, British and French troops who died defending the city between
1914 and 1918, is a feature of a 10-day Western Front Tour on November
2 this year. The tour will end in Paris where the 90th anniversary of
the end of World War I will be celebrated at 11am on November 11th.
Price starts from $2589pp including twin-share, most meals, guides,
entries, gratuities, and war history talks; air is extra. Phone 1300
135 015 or visit www.albatrosstravel.com

WHAT better place to learn to ride a surfboard than Sydney's Bondi
Beach? The Bondi Surf School keeps class numbers to just six per
instructor and provides soft surfboards, wetsuits, UV rash vests,
sunblock, and a surfing certificate; price starts from $75 for adults
and $65 for children 12-16. Details from travel agents, 1300 737 222
or www.nswholidays.com.au

BEER and chocolate top the list of a Tastes of Dunedin package at the
boutique Mercure Hotel Dunedin on New Zealand's South Island. From
$250 gets overnight accommodation, full breakfasts for two, two tour
tickets to Cadbury World and Speight's brewery, and a gift pack that
includes two bottles of Speight's beer, a small box of Cadbury
chocolates and a Happy Hen. More details on ++ (64 3) 477 1145 or
www.mercure.co.nz

THE annual Dubai Shopping Festival from December to February is one of
the world's biggest shopping, entertainment and cultural
extravaganzas, and includes fashion shows, children's events, street
performances, nightly fireworks and millions of dollars in prizes.
Tempo Holidays has a 3-day Taste of Dubai package that from $321pp
gives twin-share, two breakfasts, a half-day tour of the city's
highlights, arrival and departure transfers, and meet and assist on
arrival. Phone 1300 558 987 or see www.tempoholidays.com

TRUE: A PIPE-puffing German entrepreneur is planning the world's
first airline exclusively for smokers. He says 25-per cent of Germans
smoke and a third of Japanese, and that "twelve hours in the air is a
long time to go without a puff." The Boeing 747 he's planning for his
Smokers International Airways (Smitair) will have other comforts: it
will be all one-class, with no Economy seats, just 138 Business Class
with all the extras of Business Class service. 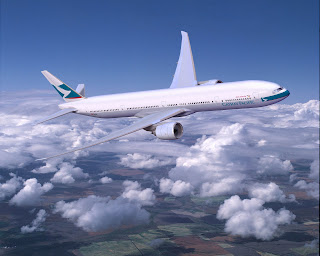 CATHAY Pacific that just a month ago announced it was adding an extra
daily flight from Melbourne to Hong Kong from October 1 to make it
three a day, increasing flights from Adelaide to a daily service, and
Perth to five a week, has now said it will add a further four flights
a week from Sydney from February 3 next year. This will give the
airline 71-flights a week from mainland capitals and Cairns to Hong
Kong, with connecting services from there through Asia, and to North
America, Europe, the UK and South Africa. Details from travel agents.

IF you're still looking for a tropical Christmas getaway that won't
break the bank, Flight Centre Hotels has accommodation at the 3-star
Whitsunday Wanderers Resort at Queensland's Airlie Beach from just
$117 per room per night for minimum 3-night stays. The Resort has good
access to the many beach, rainforest and Barrier Reef activities in
the Whitsundays area; for this and other value-priced options phone
1800 005 125 or visit www.flightcentrehotels.com.au

CROATIA's fast gaining a new popularity with holidaymakers captivated
by its beaches and medieval towns, and Russia & Beyond Holidays has a
novel way of exploring these – by motorised 30-passenger sailboats
known as 'Old Timers.' Seven nights return from Dubrovnik in a
twin-share cabin, home-made Croatian-style breakfasts and lunches, and
services of a captain and crew cost from just $534pp; there's ample
time for exploring towns like Hvar, Mlijet and Sipan, dozens of
islands, and go swimming, snorkelling or diving. Book by September 28
for holidays up to October 6 this year, or get details about next
year's sailing program on 1300 363 544 or www.russiabeyond.com.au

FLY high over cattle stations, kangaroos, scrubland and spinifex
country and the timeless beauty of the Aussie Outback on dawn hot air
balloon rides from Alice Springs. A 5-hour excursion that includes
transfers from Alice Springs hotels, 30-minute balloon flight, gourmet
bush breakfast and a flight certificate costs from $230 per adult and
$184 per child; a $25 insurance fee pp is payable at time of flight.
Details on 1800 872 835 or www.travelpoint.com.au

FIJI's newest luxury resort, Likuliku Lagoon Resort has an opening
special that includes 4-nights in a beachfront buré, all meals,
helicopter transfers and a bottle of Veuve Clicquot Champers on
arrival, a night pre and post at the Sofitel Fiji Resort in Denarau
with breakfasts, and return air from Australia. Prices start from
$3349pp ex-Brisbane, $3379 Sydney and from $3489pp twin-share from
Melbourne; book before October 31 for travel until March 31 2008.
Phone 1800 044 066 or check-out www.travel-associates.com.au

TRUE: When Robert Louis Stevenson visited Noumea in 1890 he described
it in a later travel article for an American newspaper as "an
unimpressive place built by the French from Vermouth cases."

SYDNEY A MAGNET FOR QUEENS 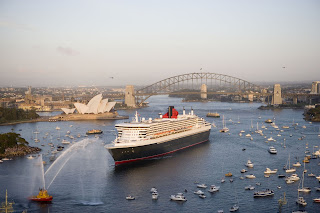 SYDNEY A MAGNET FOR QUEENS

CUNARD's Queen Mary 2 that caused traffic chaos when she visited
Sydney in February this year with 'older sister' Queen Elizabeth 2
will re-visit again on February 26 2009 as part of a 90-day Round
World Cruise. And Cunard's newest "Queen," Queen Victoria that will
make her inaugural visit to Sydney in February 2008 will also visit
again in 2009, calling first at Hobart on February 17 that year,
Sydney on February 19 and 20 and Cairns on February 23 2009 as part of
a 107-night circumnavigation of the globe. As an example, 15-nights
from Los Angeles to Sydney on Queen Mary in 2009 will start from
$5489pp twin-share plus air; details from travel agents, 13 24 41 or
www.cunardline.com.au

A DIFFERENT way of taking-in the sights of Cambodia is by pushbike: a
9-day cycle tour through the country's rural heart includes Angkor
Wat, other ancient temples, traveling past ride paddies, through small
villages, the town of Kampot and seaside Sihanoukville. Price starts
from $1160pp plus a US$100 local pay-ment, including twin-share,
internal domestic air travel, some sightseeing activities and luggage
transportation; international air and bike hire are extra. Phone
Escape Travel on 1300 799 783 or check-out www.escapetravel.com.au

SAVE $70 a night at Port Douglas with a current special at the Mantra
on the Inlet Hotel that starts from $112 per room per night for
minimum 3-night stays if booked by September 15 for travel on select
dates from October 16 to March 31 2008. Port Douglas offers secluded
beaches, fine restaurants, boutique shops, access to the Barrier Reef
and Daintree Rainforest, and the legendary Sunday Markets are a
must-do. Call 13 15 17 or visit www.mantra.com.au

FRESHEN-up your foxtrot or learn the latest dance steps on an 11-night
South Pacific cruise that will include dance lessons by professional
instructor John Paul Collins who recently won TV's Dancing with the
Stars with partner Kate Ceberano. P&O's Pacific Dawn sails from Sydney
on October 12 2008 for Luganville, Wala, Vila and Mystery Island in
Vanuatu, and the Isle of Pines in New Caledonia; price start from
$3058pp including twin-share in a Balcony Cabin and all meals, five
hours of dance lessons, a cocktail function, $100 onboard credits and
some sightseeing. Details from Ashmore and James Travel Associates on
1800 460 462 or www.travel-associates.com.au

HONG KONG's The Luxe Manor Hotel with its eclectic mix of
Post-modern, European and Oriental décor has a special of $99pp
twin-share per night from November 18 to December 31 and February 1 to
March 7 2008, including breakfast. It's the only boutique hotel on the
Kowloon side and is in the heart of Tsim Sha Tsui; phone Orient
Express Travel Melbourne on (03) 9668 8739.