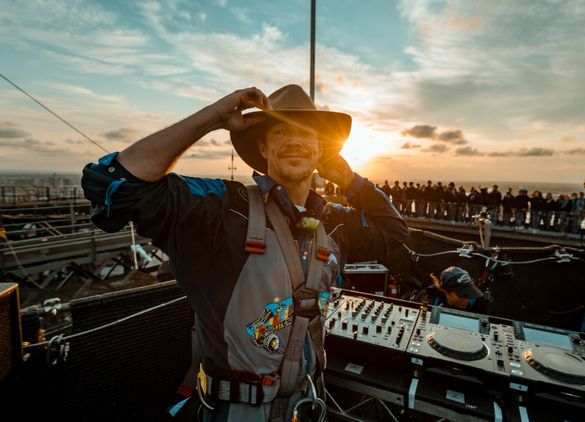 Sydney is Australia’s number one destination for international visitors to discover. Combining extraordinary natural beauty with a sparkling Harbour, ocean pools and national parks, as well as vibrant cultural diversity and fascinating heritage, Sydney has no shortage of top experiences for travellers to brag about.

Here are some of the Harbour City’s highlights:
Share your favourite Sydney and NSW holidays on social media by using the hashtag #IloveSydney or #NewSouthWales.

For more information on experiences in Sydney go to www.sydney.com or New South Wales go to www.visitnsw.com 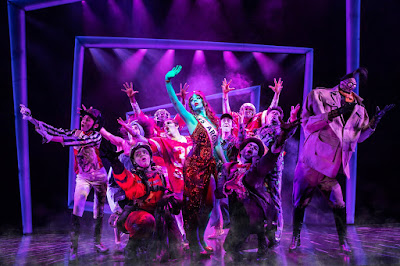 Village Halloween Parade to be Centrepiece of the Late October Celebration With Additional Events, Performances, Haunted Houses and Tours Across the Five Boroughs

New York City's season of scares and frights is a major attraction in all five boroughs each year. In 2019, Halloween enthusiasts will have a diverse range of options in every borough to enjoy the haunting spirit occupying the City all October.

The season concludes with its crown jewel, New York City's 46th annual Village Halloween Parade, on October 31, when tens of thousands of costume-wearing revellers will march up Sixth Avenue from Canal Street to 16th Street spreading the celebratory spirit with the help of dozens of live bands, eccentric puppets and enthusiastic spectators lining the street. This year's theme is "Wild Things!", challenging participants to don their most creative nature-centric outfit. The parade fun takes place from 6:30 to 8:30pm, however, the haunting experiences extend far beyond Manhattan's Sixth Avenue and begin weeks before All Hallows Eve.

"Year after year, the City's supernatural side is activated by spook-tacular Halloween attractions throughout the five boroughs," said NYC & Company President and CEO Fred Dixon. "From Staten Island to the Bronx and everything in between, families, thrill seekers, theatre fanatics and costume-party goers alike will find something in NYC to enjoy during this 2019 season."
Family-Friendly Events

The 250-acre botanical garden, home to incredible horticulture exhibitions and a year-round calendar of family events, will get a Halloween makeover with a sea of festive gourds and silly scarecrows, with corresponding special activities. Along with the themed scenery, visitors can enjoy programming like visits from "creepy creatures of the night," after-dark activities and a monstrous pumpkin display. (nybg.org)

Boo at the Zoo at the Bronx Zoo
September 28–November 3 (Fordham, the Bronx)

The largest collection of earth's most fierce predators in New York City will also host monsters of a more mythical nature this October with Boo at the Zoo. From costume parades and craft fairs for children to a Halloween-themed beer festival, Bootoberfest, the Bronx Zoo is rolling out the orange carpet every weekend for all that is spooky starting September 28 through the weekend after Halloween. Insider tip: Visitors who stay at an Affinia hotel during these select weekends can receive four tickets for the fun along with their stay with this special package. (bronxzoo.com)

For 10 days in October, the island oasis a short seven-minute ferry ride from Lower Manhattan, will transform into a Halloween paradise. Visitors can take in breathtaking views of the New York Harbor along the Jack O' Lantern trail, a tree-lined pathway weaving through centuries-old buildings. Not to mention the island is also home to Castle Williams, a 200-year-old former military fort and prison, five miles of car-free bike paths and a handful of different leisure areas to explore in the crisp autumn air (govisland.com)

Although beach season has concluded on Coney Island, there is still plenty of fun to have on the boardwalk this year, including the 10th annual Halloween parade and costume contest. Brooklyn's most festive residents will parade down Surf Avenue and enjoy face painting, a costume contest and, of course, trick or treating. Families are also encouraged to explore the nearby Luna Park's Halloween Harvest, taking place every weekend from September 28 through October 27. (coneyisland.com)

In Historic Richmond Town, a live relic from the 18th century where visitors can see what colonial life was like firsthand, families can trick or treat, bob for apples, jump in the hay and make crafts in the town's main village. (historicrichmondtown.org)

Visitors will recount the events that took place at the beautiful Snug Harbor Cultural Center & Botanical Garden in 1863 at Ghost Tour: The Tale of the Matron, a historic walking tour that includes entry into three buildings that are typically closed to the public: the Matron's House, the Butcher's Cottage and the former Surgeon's House. (snug-harbor.org)

At New York City's only interactive science museum, children are encouraged to explore the science of creepy this Halloween by using household materials to make prosthetic wounds or their own vial of fake blood. Prizes are handed out to those who arrive in costume or make one at the workshop!
(nysci.org).

While families can enjoy the pumpkin patch for three weeks, the final weekend of October is when the most Halloween fun happens on the longest continually farmed site in New York State. At the fall festival, children can take part in a ghoulish adventure in a centuries-old farmhouse, explore the Amazing Maize Maze, take a hayride, two-step to western country music and much more. (queensfarm.org)

The Ride in Masquerade
October 1–31, (Manhattan)

The Ride, the innovative and immersive bus tour of the City, will be in bewitching masquerade this Halloween season. Street performers along the tour route will hide behind their lace and bejewelled masks to celebrate as visitors enjoy enchanting stories, beguiling videos and aristocratic spirits (experiencetheride.com).

Housed in a 19th-century Tribeca building with a history of ghost sighting's, Blood Manor is an adrenaline-pumping experience with more than 5,000 sq. ft. of themed rooms designed to maximise any fears. This year, in addition to the daily frights, the 16-year veteran has added two special events on select dates. Particularly brave thrill seekers can visit for one of the Lights Out Nights, where groups walk through a minimally lit path with just one glow stick per group lighting the way, while Horrorgram invites visitors to come in full cosplay, take photos with the scenery and characters and participate in some of the most popular sets. (bloodmanor.com)

I Can't See is a brand-new horror theatre experience where participants are challenged to become a character in their own horror story. Done in complete and total darkness, guests are outfitted with an audio headset that directs them through a horror story that manifests in the real world in real-time using every sense other than sight. (nightmarenyc.com)

A 40,000 sq. ft. obstacle course with more than 100 live actors, Bane House touts itself as an attraction that plays on common fears without using any animatronics. Visitors are asked to climb up, crawl under, jump over and spin around the spine-chilling contents of this award-winning haunted experience.
(banehauntedhouse.com) 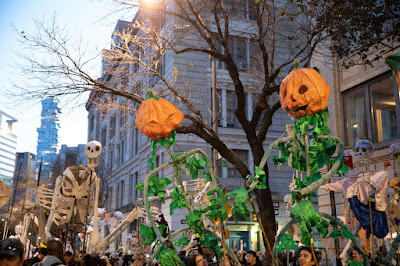 Theatrical Performances with a Spooky Spin

The popular 1988 comedic horror film's stage adaptation is a must-see this Halloween season. Like the movie, the story follows a family that just moved into a house haunted by its newly deceased former residents and the rambunctious spirit, Beetlejuice. This laugh-out-loud production is full of plenty of adult humour with stunning otherworldly stage effects.
(beetlejuicebroadway.com)

The year is 1969. After you knock three times, the journey begins with a cocktail party hosted by the Poe Society honouring the memory of Edgar Allan Poe. What follows is an immersive paranormal, story-driven, multi-room show where actors (thanks to the "medium" on-site) are possessed by the deceased writer's spirit who inspires the society to solve his mysterious death.
(theatermania.com)

On this night only, visitors are invited to take a tour of the cemetery grounds after dark guided by the glow of some of its most beautiful mausoleums. Kicking off at 7:30pm, this is a truly unique opportunity to observe the spectacular architecture and attention to detail that make the featured monuments an integral part of New York City's history. (thewoodlawncemetery.org)

This fall, visitors can explore the hallowed grounds of Green-Wood Cemetery long after the gates close to the public. Under the cover of night, this tour stops by some of the cemetery's most intriguing monuments such as the formerly unmarked grave of William Poole (aka, Bill the Butcher) and Harvey Burdell whose murder in 1887 resulted in one of the most famous trials in the Victorian era. (green-wood.com)

Visitors can celebrate the season in their best Halloween attire while enjoying the haunting beauty of the Manhattan skyline aboard this yacht party. The Halloween Boat Party Cruise includes a tour of New York Harbor, multiple bars, dance floors and music. (hornblower.com/new-york)

The trendy Midtown hotel is hosting a Halloween ball on its rooftop terrace complete with a late-night pizza bar, DJ, open bar and feature event: a costume contest with a grand prize of a one-night complimentary stay. (yotel.com)

The legendary Pierre Hotel is celebrating with a family-friendly affair including a Halloween afternoon tea at the Two E Bar & Lounge with themed savoury and sweet snacks, face painting and a photo booth. From 9pm to midnight, the Two E will be taken over by a Halloween party and costume contest with dinner for two in Perrine, two VIP tickets to an upcoming Broadway at the Pierre cabaret performance in Two E, or traditional afternoon tea for two at stake for first, second and third place. (thepierreny.com)

NYC & Company is the official destination marketing organization for the five boroughs of New York City.